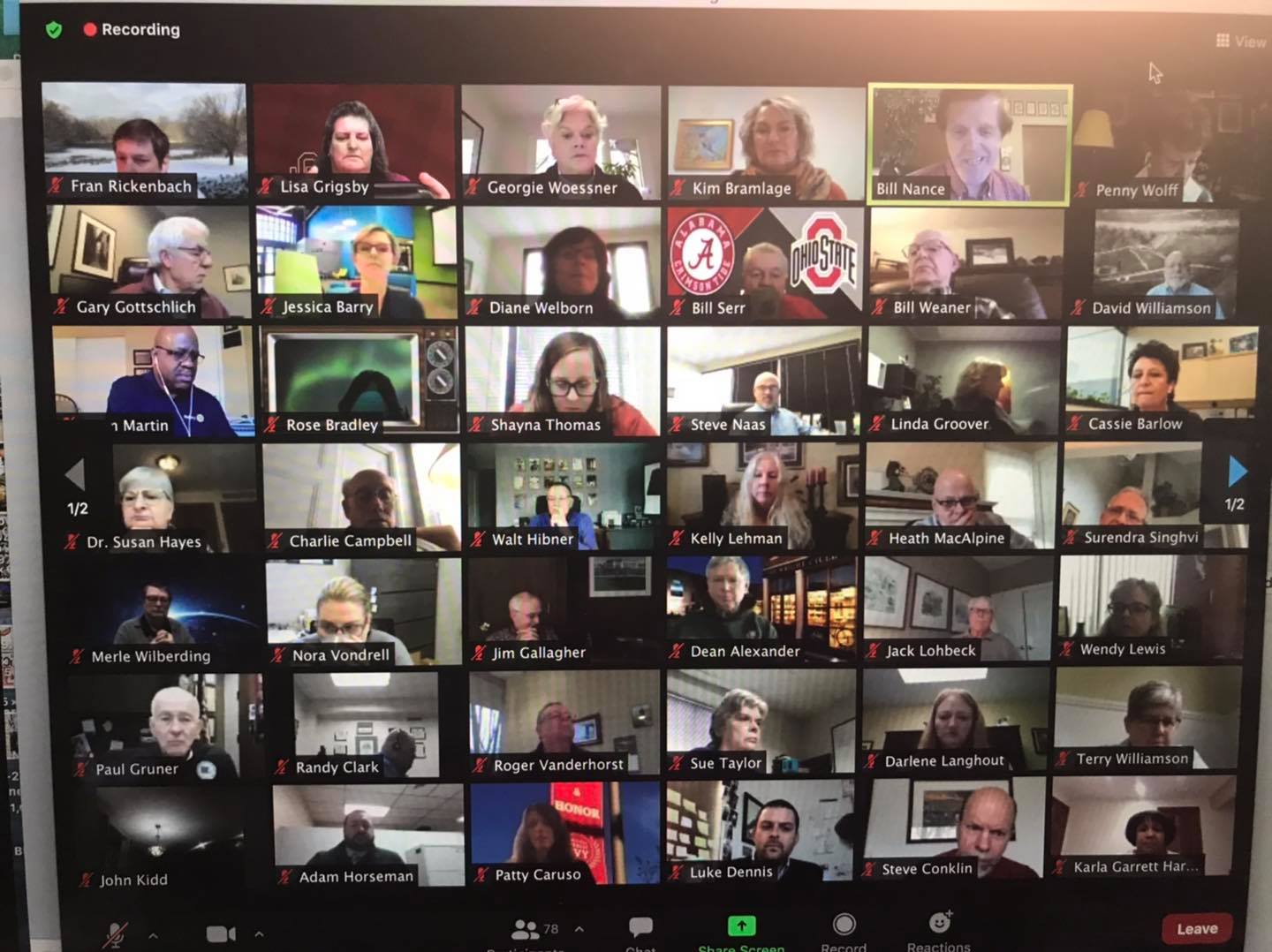 At the conclusion of the Zoom meeting breakout sessions President Brian Martin called the meeting to order at 12:13 PM and asked Bill Nance to lead the invocation, 4-Way Test, Pledge of Allegiance and share the news of the day. During Bill’s invocation he shared the January 6 prayer of Barry Black, U.S. Senate Chaplain.  The prayer reminded us that words matter.
Secretary Kim Bramlage then came to the virtual podium to introduce visitors.  Visitors included Adam Horseman of Robert K. Jones Insurance Agency.

Kim introduced Shaun Yu who announced that our next Bring a Guest Day will be February 8, 2021.  The speaker that day will be Futurist Gary Golden.  All members are invited to attend for this special presentation and encouraged to invite a guest.
Kim shared this week’s birthdays. Rotarians recognized for birthdays were Walt Hibner, Tom Budde, Alan Pippenger, Phil Parker, Jerri Standard, and Suren Singhvi.

Secretary Kim Bramlage asked for any Day Tens. Kim Bramlage gave a Day-$10 to celebrate the one-year anniversary of her trip to India for polio immunizations; Dave Williamson gave a Day-$100 for the Cleveland Browns playoff victory, the Ohio State Buckeyes upcoming national championship game, and for being appointed as the President of the Greater Dayton Regional Transit Authority Board; Suren Singhvi gave a Day-$106 as a combination of his birthday and the number of years he has been a Rotary member; Greg Birkemeyer gave a Day-$20 to celebrate the completion of 10 days of quarantine for himself and his wife; Walt Hibner and Alan Pippenger each gave a Day-$100 for their birthdays; and Patty Caruso gave a Day-$10 in celebration of the completion of her virtual MBA from Miami University.

President Brian Martin came back to the virtual podium to share several announcements.  He reminded members that Rotary is a membership organization and to keep recruiting.  Brian encouraged members to share updates about other members if you know about how they are doing while we meet remotely, especially regarding members who are not able to meet remotely.
Brian celebrated the recent work of the Peace Committee to feed the hungry in our community during the holidays.  Brian shared that the Rotary office building has been purchased by Sinclair who plans to raise the building.  So, the Rotary office will need to move.  If any members are aware of space for lease, please contact President Brian.  Lastly, Brian mentioned that the website continues to grow and offer more on-line services for members.

President Brian Martin came back to the virtual podium to introduce Georgie Woessner as Chair of the Day.  Georgie introduced our speaker, Rotarian Lisa Grigsby.  Lisa’s presentation focused on her role as Film Commissioner for FilmDayton.  Lisa provided background information about FilmDayton which started in 2008.  FilmDayton’s mission is advancing the art, craft and business of film in the Miami Valley.  Lisa described some of the work FilmDayton has performed in the past 12 years to include working to keep Wright State film students in our region and lobbying within the State of Ohio for film tax credits.

Lisa shared that in 2016 FilmDayton rebranded itself when it became a certified Film Commission.  As a Film Commission it works to 1) market the region to production companies; 2) identify suitable venues and locations; 3) assist with finding crew, equipment, housing and props; 4) connect service providers with production companies; 5) consult on permitting, permissions, road closures, police and fire safety needs; and 6) do anything needed to get films made here.  Also, in 2016 FilmDayton appointed Lisa as its film commissioner.  She described her role as film commissioner as being a cheerleader for Dayton.  In her cheerleader role Lisa believes that Dayton needs a visible welcome to Dayton sign in the community.
Lisa highlighted many of the productions that have been made locally including:
· Carol – filmed in 2014
· Miles Ahead – filmed in 2015
· My Days of Mercy – filmed in 2016
· TV Talkshow – The Real – filmed in 2018 from Courthouse Square
· Boy Band – filmed in 2018
· The Old Man & the Gun – filmed in 2018
· Hillbilly Elegy – filmed in 2019

Lisa highlighted artists who have found success with local ties including:
· Hannah Beachler – Centerville Native and Academy Award winner
· Henrique Couto – has made over 30 films in the Miami Valley
· Steven Bognar & Julia Reichert – American Factory
· Dave Chappelle – including some production in Yellow Springs with David Letterman

Lisa shared that since 2009 the State of Ohio has seen more than $1.1 billion in economic impact from films.  Additionally, the films have generated 6,192 full-time equivalent jobs in Ohio.  While that is a large impact, FilmDayton does not receive any funds from media productions.  Lisa described that Rotarians can actively help FilmDayton by becoming a member, registering your property on their website, joining a local scouting team, becoming a sponsor or volunteer.
Lisa answered questions posed by Rotarians on Zoom or in the Zoom chat box.
President Brian wrapped up the meeting at 1:05 PM with a reminder that there is no meeting on January 18 due to the Martin Luther King Jr. Holiday.  President Brian encouraged Rotarians to find community events to attend on Martin Luther King Jr. day.  See the link below to register for a Virtual MLK Day Event sponsored by Sinclair. 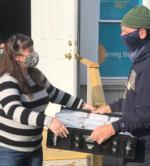 The Dayton Rotary Peace Committee continues to strive for ways to build relationships in neighborhoods in West Dayton.  One of our committee members, Reverend Elmer Martin, who serves as pastor of Greater Allen AME suggested that hunger has become an even more critical need of so many in the community since the pandemic.  If people are hungry, peace becomes difficult to achieve.

Working with Reverend Martin and Father Benjamin Speare-Hardy of the West Dayton Caravan of Churches, our committee organized a Holiday Meal Distribution at two churches in West Dayton, Greater Allen AME and St. Margaret’s Episcopal Church.  On December 19, 2020, the Saturday before Christmas, we would pass out food to anyone who showed up at the churches.

The Peace Committee contacted Miami Valley Meals (MVM), a newly organized non-profit, that provides free meals to the hungry.  We contracted for 200 frozen meals and the churches provided dozens of frozen turkeys and hams as well as canned goods for pick up at the two locations.  Volunteers from the Dayton Rotary Peace Committee and the two churches manned the distribution stations outside both churches that Saturday.

The Holiday Meal Project was a total success!  We distributed all 200 meals, the frozen hams and turkeys as well as the canned goods available.  To see the smiles on the faces of the people who drove up to receive the donated food was priceless.  We took that first important step in building a relationship with the community.  We all agreed we would do this again next year and hope to reach even more people in need. 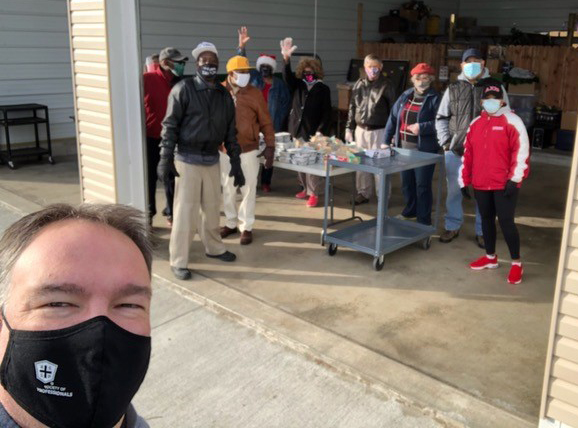 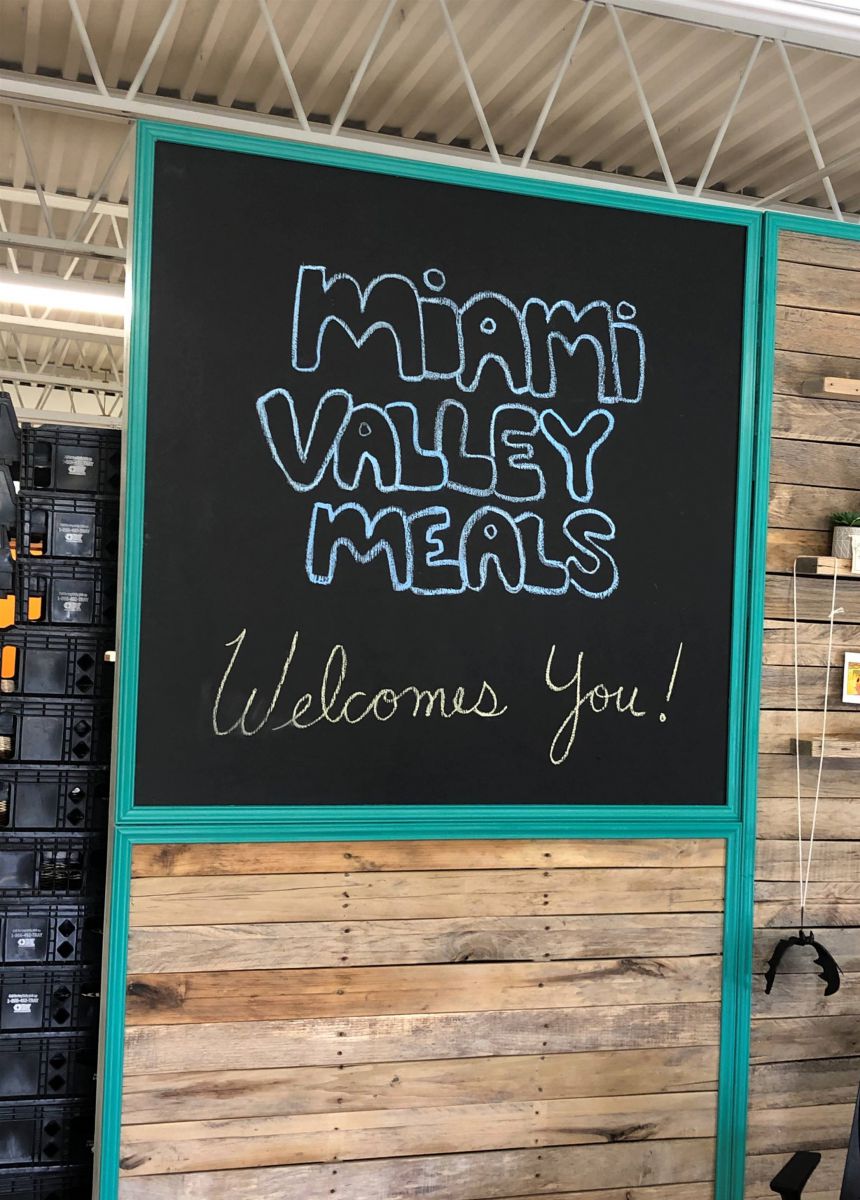 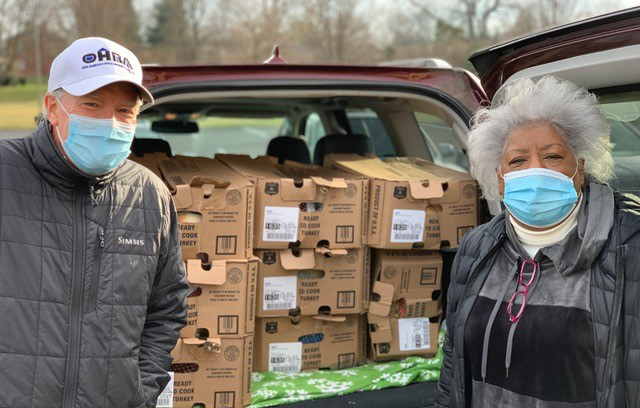 The 25th anniversary of the Dayton Peace Accords, the landmark treaty that ended the violent hostilities of the 1992-95 war in Bosnia-Hercegovina, occurred on November 21, 2020.

Until 2019, there had been no permanent exhibit in the Dayton area to commemorate this achievement and educate the public on:
The Dayton International Peace Museum produced its first permanent, interactive exhibit to accomplish these goals in November 2019. With the pandemic closing museums in early 2020, innovation was needed to appropriately commemorate the 25th Anniversary.

The Dayton International Peace Museum partnered with the Rotary Club of Dayton to digitize the exhibit and offer it online throughout the world to visitors, researchers and students, even those who may never be able to visit Dayton, Ohio in person. By offering the interactive exhibit online, it is even easier to use as curriculum material for educators. As such, the “Magnificent 17” (Rotary Club of Dayton members lead by the Dayton Club’s Peace Committee) raised $3,000 to serve as the Presenting Sponsor of the online exhibit, which can be viewed by visiting https://accords.daytonpeacemuseum.org/
Share